skip to main | skip to sidebar

Hey guys! It doesn't really look like anyone is posting on here, but I finished this short recently and figured I'd share it. This is called 'The Astral Woman', though not expressly animation, there is a short animated segment...

The Astral Woman from Cait Davis on Vimeo.

In many cultures, The Astral Man or The Cosmic Man is a symbolic representation of the human beings potentiality towards wholeness. The symbol can also be seen as a symbol of Self. "According to the testimony of many myths, the Cosmic Man is not only the beginning but also the final goal of all life--of the whole of creation." (Marie-Louise von Franz, “Man and His Symbols”) This symbol is sometimes represented as a hermaphrodite, to show the joining of opposites, though quite often is represented by a white male human being. In “The Astral Woman” I have begun what I hope to be a small series of various short films that start to re-define the masculine dominance in our cultural history. I want to take strong and meaningful concepts and replace the dominant image with something different.
Posted by Cait Davis at 11:39 AM 2 comments:

The Terrible Thing of Alpha-9 by Jake Armstrong

I enjoyed this greatly.

Posted by Cait Davis at 6:46 AM No comments:

Gegege No Kitaro by Shigeru Mizuki

Posted by Chogrin at 1:35 AM No comments:

Posted by Chogrin at 1:34 AM No comments: 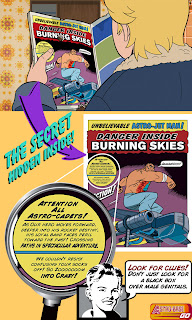 In case any of you saw the Venture Brothers Season 4 premier this past Sunday, and didn't happen to catch this hilarious Easter Egg the first time around, heres a verison not blocked by Hank's thumb.
(via Doc Hammer's myspace)
Posted by Fondle at 7:14 PM No comments:

Posted by Chogrin at 1:01 PM No comments:

Posted by Chogrin at 1:01 PM No comments:

The Astronomer's Dream (2009) from Animalcolm on Vimeo.

The Terrible Thing of Alpha-9!

Insert Coin from vurup on Vimeo.

Posted by Chogrin at 9:41 PM No comments:

Posted by Chogrin at 7:28 PM No comments:

The sound is completely out of synch on this, which sucks. But it's interesting, anyway.

(Son of the white mare)

"Excerpt from the animation Marcell Jankovics made in 1982."

Brought to you by Anonanastan
Posted by Chogrin at 11:07 PM No comments:

Advertisement for Scrabble by Ogilvy & Mather, Paris. This one is called "Yoga." It has a great retro, old cartoon feel! This came from an article at the SuperPunch Blog.

Posted by Chogrin at 8:29 PM No comments:

This is directly from Cartoon Brew

“Congobeat” has posted on YouTube several really cool, vintage animated advertisments from Australia. ........ this one a TV spot from 1959 that introduces the I like Aeroplane Jellies theme song"

Posted by Chogrin at 2:30 PM No comments:

"An animated film, in humorous style, which makes the point that dissimilarities between people are not basic but result from superficial environmental influences. Based on the pamphlet 'RACES OF MANKIND' by Ruth Benedict and Gene Weltfish.

Thanks to Character Control

The Secret of the Kells

"The Secret of Kells is a largely hand-drawn 2-D animated feature that is garnering a lot of good buzz from people who have seen it, such as this Variety review that calls it “absolutely luscious to behold…UPA-studio-meets-the-Dark-Ages characters with intricate, Celtic design-inspired detailing.” The 6 million Euro feature originated out of the studio Cartoon Saloon in Ireland, but is a truly global co-production with studios from Brazil to Hungary working on the film."
Posted by Chogrin at 11:55 AM No comments:

Labels: Cartoon Brew, Celtic, The Secret of the Kells, Upa

FLINSTONES: On the Rocks!

Here it is finally! Thanks to my buddy Craig Parrillo for the heads up!

"This was a rarely seen animated special that aired in 2001 on "Cartoon Network's Cartoon Theatre" based on the original series.

With Fred and Wilma's marriage falling apart the Rubbles take them on a vacation to fix their relationship, but when a jewel thief gets a stolen diamond mixed up with one of Wilma's bags Fred uses it as a way to win Wilma back (unaware that it's stolen) while the thief pursues them to get it back.

This film is notable for having a unique dream sequence for Fred done in puppet-motion animation. It is also the very last animated Flintstones project from Cartoon Network, as well as the show's original creators William Hanna and Joseph Barbera (William Hanna died before this film aired and was dedicated to his memory). "

To watch the rest of the movie go to CN90s youtube page!
Posted by Chogrin at 7:34 AM No comments:

Labels: 90s, CN90s, hanna-barbera, on the rocks, special, the flinstones

"A short film created by Bill Wray that aired on Cartoon Network in 1999, right after the premiere of "Courage the Cowardly Dog", about an intergalactic space crab who has his cadet taken over by an alien parasite after coming back from their latest mission.

Even though this short has a very Spumco-ish feel to it John Kricfalusi was not involved in it in any way. However, Bill Wray had worked on "Ren & Stimpy" as a background artist before making this short. "

Posted by Chogrin at 9:29 PM No comments:

More here:
www.buenothebear.com
Posted by Chogrin at 9:29 PM No comments:

And now for "Ryu VS. Popeye"

This is too awesome! I think I've found my favorite version of Watchmen. Enjoy, laugh, and cry!

by Harry Partridge (a.k.a Happy Harry)

From the creator of Adventure time, Pen Ward, comes Bravest Warriors! This was another "Random Cartoon" for Nickelodeon, produced by Frederator Studios. Check it out, its amazing!

The Happiest Monster by Jonathan Kim


More at PersonaSama!
Posted by Chogrin at 11:11 AM No comments:

Posted by Chogrin at 5:46 PM No comments:

Posted by Chogrin at 1:32 PM No comments:

Posted by Chogrin at 1:31 PM No comments:

Posted by Chogrin at 3:57 PM No comments:

Recently my Art Director bought an old Disney book, called the "Art of Walt Disney" for only $1! This book is filled with great sketches, stills, and photos. A lot of the artwork comes from the one and only, Ub Iwerks, an animation pioneer, wizard and a huge inspiration and influence for the way I work. I'll be writing more on him later, but for now I hope you enjoy these scans I made from the book. 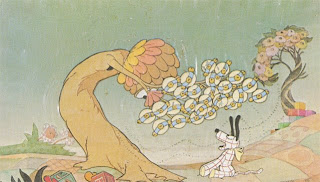 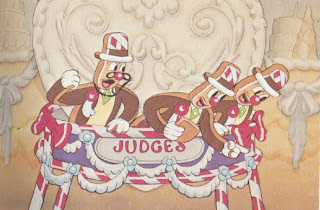 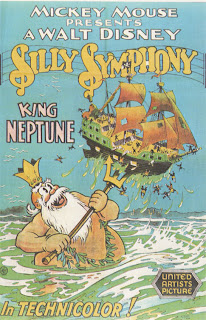 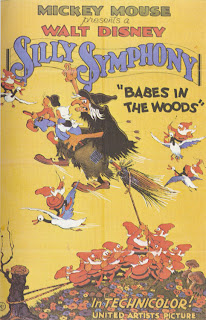 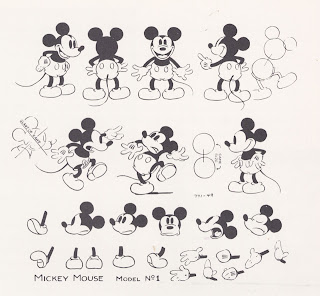 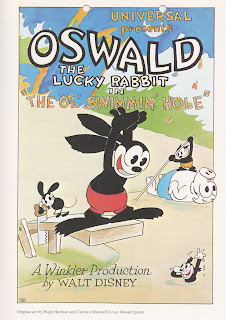 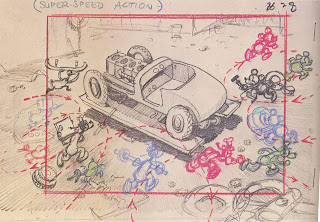 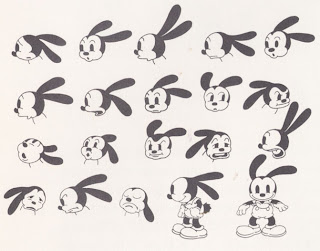 P.S. Thanks again Eamon for posting on Shotaro Ishinomori. He's amazing and also a big influence on my work, along with Tezuka, Yokoyama & Toriyama!
Posted by Chogrin at 1:43 PM No comments:

Thought I'd share this with everyone. Behind the ink with one of the best characters ever created! Thanks to my good friend, Craig Parrillo for sharing this with me and to E.C. Segar and the Fleischer Bros.! 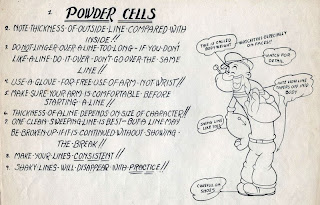 Posted by Chogrin at 1:42 PM No comments:

For those interested, I've been uploading my video projects that I did while I was in school for my film minor and sequential art classes on Youtube.

Among them is my short Documentary / Music Video during my internship at Cartoon Network Studios for Class of 3000. Enjoy!

P.S. "lil Joe" is the nickname I got at Cartoon Network, since there was already another Joe on the show, and I was the youngest of the bunch.
Posted by Chogrin at 12:40 PM No comments:

A portrait of Ken Boyer by Bruce Timm

My friend Craig Parrillo recently let me borrow his copy of Bruce Timm's (Modern Masters Vol. 3) and found to my amazement Ken Boyer Illustrated among other crew members for Tiny Toons. For those of you who don't know, Ken has been a big influence on Tiny Toons, Animaniacs, the Tigger movie, 101 Dalmations the series, and other great animated shows and features. Ken is also a good friend of mine and was my mentor during my internship at Cartoon Network Studios in 2006. 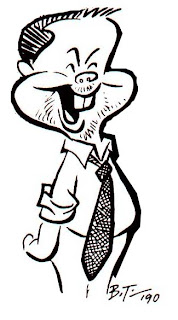 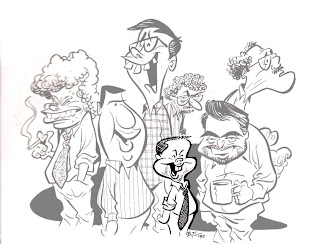 Posted by Chogrin at 1:19 PM No comments:

"Falling Short of God's Glory Through Sin" by Bob McKnight 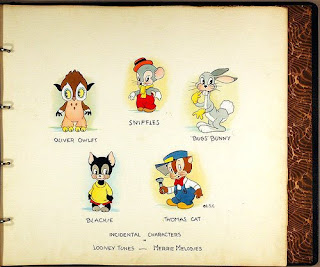 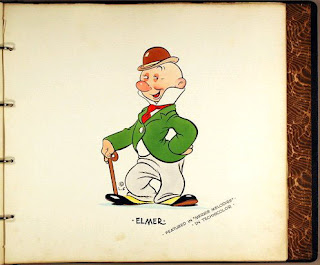 Posted by Chogrin at 9:45 AM No comments:

It was recently told to me by my good friend and Mentor Dr. Bob Mcknight that there is a book drawn in the style of 1930's cartoons, a.k.a the Rubber Hose style. A very short-lived animation style that is slowly resurfacing today.

The book is called "Cartooning: Animation Basics" by Walter Foster. 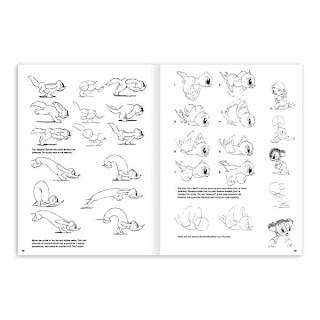 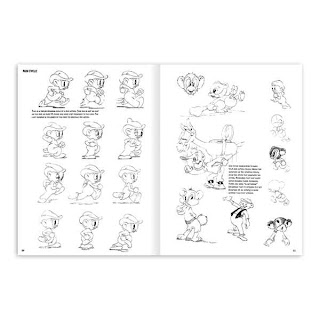 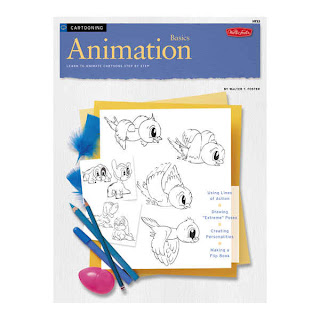 Copies of the book are available for purchase at www.amazon.com or at www.walterfoster.com
Posted by Chogrin at 9:33 AM No comments:

This Weekend (It All Started Here!) 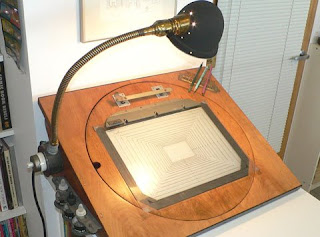 This Article is from Cartoon Brew:

"Here’s a restored 1936 Fleischer Studios drawing wedge (click photo above to see larger image). It’s made of wood and fitted with ball-bearing’d wheels to ease the rotation of the heavy disc. It also has two inventions of the Fleischer’s employed on it:

1. a lever which when pushed down, will slide the drawings off the pegs in an uniform fashion so as to not rip the peg holes in the paper

2. an inkwell tray with a sliding latch which locks the bottles in place. (This was added later on and wouldn’t have been on an animator’s/asst’s disc)

This contraption began its life in the NY studios at 1600 Broadway, then traveled to their new Miami complex for several years, only to return to Manhattan as the property of Famous Studios. It also comes with Marty Taras’ fieldguide. . .

…and it will be part of It All Started Here, the East Coast animation exhibition curated by Howard Beckerman and J. J. Sedelmaier. Presented by ArtsWestchester in partnership with J. J. Sedelmaier Productions, Inc. and Blue Sky Studios, this citywide celebration of New York’s 103 year relationship with the animation industry will have its opening reception on Saturday, Jan 17th, from 5-8pm at The Arts Exchange, 31 Mamaroneck Ave. in White Plains, New York. This is the kick-off for a month of screenings, parties and displays.

For more info regarding all the It All Started Here festivities check the Facebook page. And, to whet your appetite, JJ sent us a very vintage 70s era Wyler’s Lemonade spot by Jan Svochak that will be in the Commercials section of the film program. . . "

Posted by Chogrin at 9:27 AM No comments:

Thanks Craig!
Posted by Chogrin at 8:56 AM No comments:

Posted by Chogrin at 8:38 AM No comments:

Posted by Chogrin at 8:37 AM No comments: 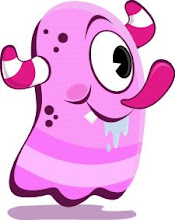